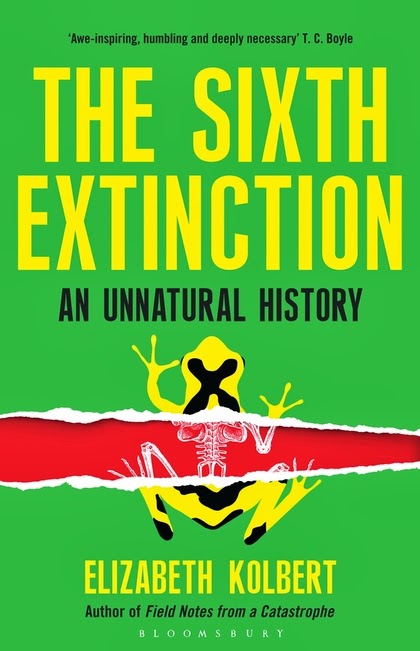 Kolbert is a journalist, rather than a scientist, but her ability to communicate scientific concepts is evident in this accessible and highly researched book. It blends history with cutting edge discoveries; it has a good overview of the development of the ideas of evolution and species dispersal, of the gradual understanding of the length of life on the planet.

Each chapter is arranged around the story of one species emblematic of an idea or problem, including: the Panamanian golden frog and the discovery of the devastating chytrid fungus; the idea of extinction as arrived at through the examination of mastodon fossils; coral and the acidification of the seas; the fragmentation of rainforest as told through a single tree species and the repercussions of climate change; or the desperate plight of American bats and a plague perhaps introduced by travellers visiting a tourist cave system.

In all of these things, human actions are the essential agency of change. It is perhaps hard to use the word ‘enjoyable’ when the subject is so terrifying, but I found this book absorbing and thoughtful, and it makes me want to read more on various subjects Kolbert covers – a sign that the book has engaged and stimulated in equal measure! 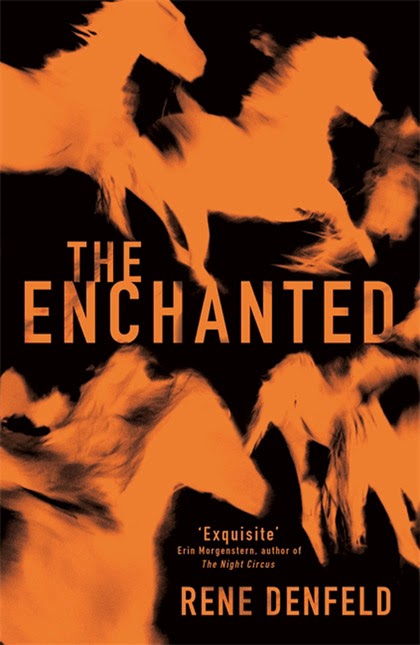 A prisoner on death row watches and listens to what happens around him. We don’t know what he’s done, because he can’t face it himself. He hears The Lady try to make sense of one of his fellow inmate’s life and actions in an attempt to save him from execution; he sees The Priest lost in the maze of good intentions and diminishing faith; he watches the beginnings of something fragile between them. The prisoner shrinks from any contact, but reading and re-reading brings colour to his cell – that and the Horses.

Language is the enchantment in his dark world, and as the story unfolds, if we do not and can not condone, we come to understand the prisoner’s life. A powerful book best consumed in one sitting, then thought about quietly long afterwards.

Coralie has been brought up by her slightly sinister father to impersonate a mermaid in his Museum of Extraordinary Things – a freak show on Coney Island in the early years of the 20th century. She is kept separate from human society to preserve the illusion of her otherness, but as the nature of mass entertainment changes, her father looks for different attractions. He also displays her in less innocent circumstances, as his business declines…

Eddie is a young man who rejects his Jewish background and feels betrayed by what he perceives as his father’s weakness. He becomes intrigued by photography, and when he witnesses a terrible tragedy, finds himself embroiled in both cover-ups and mysteries.

How these two disparate characters find each other and their true place in the world is a riveting and beautifully detailed read.

It took me a few chapters to get into this novel, as it is narrated by a collective chorus of voices – the wives of the men involved in the Project at Los Alamos during WWII. Once I had gotten used to the multiplicity of storytellers, I found this thoroughly interesting. The women have come from all over the country, kept ignorant of their husbands’ works and dealing with life in an isolated and isolating place.

From the difficulties of maintaining their families, the jealousies and friendships and hardships of living in a town constructed for one purpose, the need to maintain secrecy and something of their own lives and the many and varied ways they coped (or didn’t) this is an admirable exercise in evoking place and time and experience.

Frank has been involved in a very bad accident. He doesn’t remember very much of his past life as a husband, employee in the family law firm (where there was none better at dealing with the fine print of contracts) and is being told who he was by his wife, his older brother and various acquaintances.

It’s rather puzzling though, the things he does remember don’t quite seem to fit with the pictures other people make of him and for him. And what is his younger brother trying to tell him in the strange and entertaining emails he keeps sending? As Frank’s past life gradually comes back to him, he starts to realise there are plenty of terms and conditions to living that he may not have been aware of in his previous incarnation…

I really enjoyed Frank and his gradual reawakening to life’s possibilities, and how the underdog can actually come out on top!

A collection of eight short stories, this is the first from this celebrated writer in 15 years. Each story explores time’s passing and its effects on relationships. Very few of the characters are happy or even content; mostly they are in the ruins of personal relationships – marriages dissolving, friends dying, the aftermath of divorce and all the attendant griefs of failure.

Observant, occasionally poignant, tender and often just on the edge of something hopeful, these are fine examples of how the short story can often convey more than whole novels. 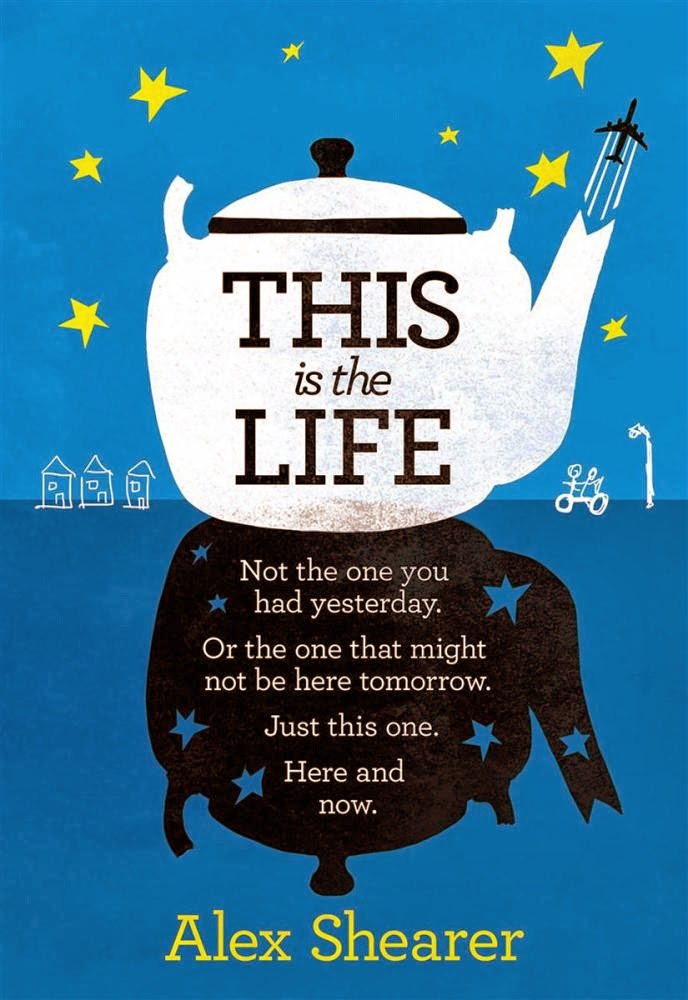 This is the Life
Alex Shearer

I think so far this year, that this is my favourite novel. It is a tender and sometimes poignant novel of two brothers and their loving but sometimes difficult past. The younger one has left his family and work in England to fly to Brisbane to be by his brother's side. Louis has brain cancer, it turns out, but he's not going down without a fight.

He has never quite found his place in the world, possessing both intelligence and principles in equal measure; nor has he ever really settled down as restlessness and his own eccentricities play against other people understanding him fully. Despite this, Louis' friends are true ones, and his younger brother adores and tolerates him. As the disease takes hold, and takes away, brotherly love supports, consoles, and deepens the understanding, that this is the life.

With a cast of beautifully drawn characters, and a feeling that this is not a novel but almost a memoir, the veracity of the descriptions and wonderful flashes of humour make this touching book quite special indeed.

All the Light We Cannot See
Anthony Doerr

Marie-Laure loses her sight at the age of six. Her father, the locksmith for the National Museum of Natural History in Paris, helps her navigate her life by constructing intricate models of her surroundings. Werner is an orphan living in Zollverein who has an uncanny mechanical aptitude but in Nazi Germany is destined for the coal mines that claimed his father’s life.

As they grow, both Marie-Laure and Werner face challenges they can overcome, but the gathering forces of war are going to rip them from their accustomed lives. When Marie-Laure and her father flee Paris for St Malo, they are carrying what may be a precious and myth-shrouded jewel – or a decoy to fool the Nazi treasure plunderers. Werner also finds himself serving in St Malo, his talent for wireless engineering much in demand. He has succumbed to the ideology of his times, but uneasiness is always under the surface of his thoughts. When the Americans bomb St Malo there may be a chance for redemption…

An intricate novel but easily read as the alternating chapters follow first one then the other character. Beautifully plotted and very finely written, this was a moving, haunting story of the effects war has on innocence.


For Once in My Life
Marianne Kavanagh

Tess believes in soul mates. She’s pretty sure that the thoughtful, attractive and faithful Dominic is hers. George doesn’t believe in soul mates, but he does believe in music, love and doing the right thing. They’ve never met, but they have mutual friends, most of whom think Tess and George would be good together. It takes a few years, and plenty of mistakes before they do finally meet, but by then both are happily enmeshed with other partners. Or are they?

A charmingly entertaining and ebullient novel that is perfect for a lazy weekend (and will no doubt one day make a perfect Saturday afternoon rom-com movie!).