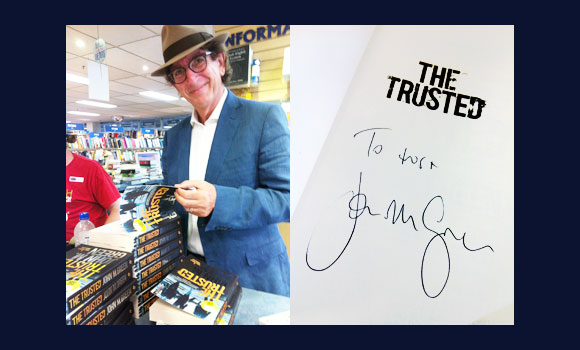 Aussie writer John M Green, author of The TRUSTED, holed up in an alley behind Abbey's to give us the lowdown on his new thriller.

View Part 1 of the interview

Mr Green: I then approached the experts. I'd find experts on, say, hacking computers. And say my character is the Head of Development inside a clone of a software company like Adobe, a company I called Sofdox…

Abbey's: You have a lot of fun with names. I think Sofdox for the software company is excellent - it sounds real.

Mr Green: It is now. I bought the domain for it. (laughs)… And the head of development...

Mr Green: Exactly, but that's another story. So I told the hacking experts that this guy Tom Majors is a genius who is going to put malevolent code in the predominant PDF software and one day when you get the usual "Do you want to update?" message, it will be a siamese twin for the real code and it will blow up your computer on your desk. And the experts said, "Well, you can't do that" and they explained all this technical mumbo-jumbo which I then started to understand. So I went off and did more research and then I'd come back to them, "Well, what if Tom Majors did this?" And again they would point out why it wasn't possible so we'd go for several iterations sometimes over weeks, although the 'nuclear incident' took months, and then eventually they'd say "Holy sh*t, you can do that!"

Mr Green: And this was a very interesting revelation because it happened to me several times with the experts. The people I was dealing with in the hacking space were 'white hat' hackers - they were good guys who work with organisations to see if they can penetrate, so they can work out what to block. So I was dealing with good people, and the good people don't think like bad people. I was the 'bad person'. And I was using their knowledge to do bad things. So, I was the trusted. I was the one inside the tent, with the knowledge - I can do anything. We're all familiar with the disgruntled employee but what if they're not disgruntled? What if they pretend to be passionate about their job but they're really more passionate about some political objective?

Abbey's: They get a wonderful plug on a couple of occasions. Have you met them?

Mr Green: Well, Rob Hirst, who was in Midnight Oil as well, is a good friend, and I sought his permission. And in the first book I had a Midnight Oil song, a sex scene to…

Mr Green: … The Power and the Passion which I sought his permission for as well. But The Break is an astonishing band. Their new album is about to come out and they are touring with Rodriguez on his Australian tour. Similarly with The Atlantics, who I also mention in the book - a lot of people don't remember the name, but Bombora and Pipeline are two Australian, global classic hits of the 60's and they're still playing. I like portraying some sense of Australian culture within my stories…

Abbey's: And give a sense of place….

Mr Green: Yeah, I'm proudly Australian - I think this is the best country in the world to live and work in. I particularly love the Northern Beaches which I think comes through in the book.

Abbey's: Yes, I thought the Aussie 'surf chick' as the hero was an unusual choice. How did she form in your mind?

Mr Green: Well, when I was dreaming up Tori Swyft, I wanted to create a modern-day, female 'James Bond' who had brains. And she had to be sporty. All of my heroes have been female. I guess I've got a personal fixation that I like all of my heroes to be strong-willed, articulate, successful women because I think that there aren't enough female role models in the thriller genre.

Mr Green: I'm really thrilled that you found that amusing. (laughs) It's a bit cheeky - but it could happen, you know.

Abbey's: That's where a book like this gets you thinking. You're wondering, could this really happen?

Abbey's: You also have a bit of fun by introducing a few links into your previous books. Isabelle Diaz gets a mention.

Mr Green: Yes, well I needed a President in The Trusted, so she gets another guernsey.

Abbey's: The book is also populated with impossibly bright people surrounded by extreme levels of wealth.

Mr Green: I needed to have an extraordinary organisation, a secretive, well-connected one with resources such that they could jet around the world as needed.

Abbey's: Getting back to the real world, tell me about Misfit Aid that you're supporting with this book. This is an organisation that I hadn't heard of, and it amused me thinking about sending a bunch of surfers overseas to a country saying "Go do some good" - I mean, do those guys really exist? (laughs)

Mr Green: They do (laughs). Have a look on their website - it is really astonishing, with video clips about what they do, helping areas that have had natural disaster. How the connection came about was that all of Pantera Press books promote a charity in one of the areas that we're interested in. So that's the love of reading, the love of writing, and fostering ideas - they're the three main ideals. When we came to The Trusted, we thought how cool it would be to have a surf-based charity to match with Tori's love of surfing. So what we've done is a combination of surfing safety and promoting reading. We've had a program of surf reports on radio that in addition to the safety information, also promoted the idea of taking a book to the beach.

Abbey's: And finally, if The Trusted was to make it to screen, is there an actor you see as a good fit for Tori Swyft?

Mr Green: Scarlet Johansson - she's my choice - if I was ever so lucky for this to make it to the screen. But of course, I'd have no say in that decision. (smiles)

Abbey's: Scarlet would be an excellent Tori, though she'd need a few freckles. Thanks John, for making the time to speak with me today.

Mr Green: Thank you, I really enjoyed it.

*bullets fire and crack the rendered wall above our heads. John grabs his hat and dashes down the alley way, rounds the corner, and is gone*