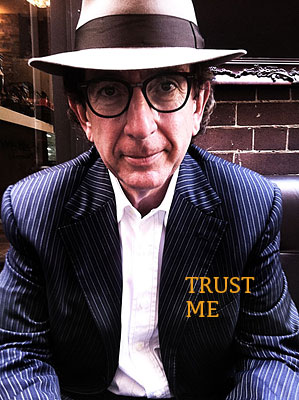 On the eve of unleashing his new thriller, The TRUSTED, John M Green holed up in an alley behind Abbey's to tell us how his book came about.


Mr Green: Have you read it? (laughs)

Abbey's: Yes, I did. My wife [ed: she's a crime fiction addict] will be the next one to read it.

Abbey's: The first thing that struck me about it was that I used to read a lot of Robert Ludlum as a young man and there's some things about this -  the fast pace, the technology and the mentioning of models and makes and that sort of stuff - that brought all that back to me. So I was wondering, when you write a book like this in particular, is there a style that you have in your mind, a sound if you like, that you're writing to?

Abbey's: …a mood… is it a fast-action thing? Or is it something else?

Mr Green: yeah… a mood… I guess what I'm really trying to do is to create the relevant mood for the part of the book. So there are different - I hope there are different parts - different moods in different sections of the book, because overall, yes, I want to write a fast, pacey, gripping thriller, but it can't all be fast and pacey. You've got to have breathers and diversions, otherwise readers get exhausted.

Abbey's: And it does build up. It starts out slower and starts to build and by the time all the calamity is unfolding, that's when it's really bowling along.

Mr Green: Yes. Exactly. And that's what you're trying to do. You're trying to be a bit like a high performance car that is going on a long journey and it takes a little while to build up the pace. You don't want to put the pedal to the floor straight away because it's very jarring. You do want something intriguing at the beginning to suck people in to the story, which I hope I've done, and then you want to build up and create some colour around the characters so that people can start to have empathy or dislike for the character, depending on what type of character they are, and also try to create conflict around the characters. And then as the story goes on, to build up that pace until you get to the climax, when hopefully for this type of book it becomes quite scary.

So a lot of that does involve the detail that you've spoken about, because when I'm writing I try to close my eyes, figuratively speaking, so that I can actually see what the characters are seeing. I want to be able to touch it and smell it and hear it and so on, so when I'm in a particular scene, I try to imagine myself in that scene and put my head inside that character's head and try to see what they're seeing and feel what they're feeling, and then I can sort of say 'Oh… well, where would the shadow have been?' and 'There were some roses over there - could he have smelt them?' Is there any music in the background, or is it just quiet? Or is there an ambulance going past? So it is those sorts of things I try to do, but not overdo, because that can slow you down as well.

Abbey's: Yeah, and you can end up with a very different style of novel, very descriptive if you like. You mentioned Morris West before [ed: pre-interview banter], so is there an author like that who you may have read when you were younger? Do you think they influence you in your own style?

Mr Green: I think, when I started writing thrillers, I chose thrillers. I mean, I have a more eclectic reading taste than thrillers, so I read very widely, both in fiction and non-fiction, but what I found during my business career was that I particularly liked reading thrillers when I was exhausted. Or when I was really busy. They gave me an escape from reality that I needed. They forced me into a zone that was very relaxing, even though they can be quite tense. Because they just take you away from everything else that you care about. So I decided, when I was wanting to start writing, that I would try to write those books, because they're not just entertaining, they're also therapeutic.

But when I thought about who might be my model for that, I actually thought about Michael Crichton. And the reason I particularly like most of Michael Crichton, not all, is that what he did was, he didn't just write an entertainment, he picked a very important, hot issue of the day and then built a story around that. So it was entertaining, but it made you think about the issue. If you think about Jurassic Park, which I think is a sensational book - the movie was extraordinary - but the book itself, to me in a way is more extraordinary, because what I love about books as opposed to movies, is the author gives you the skeleton, and you the reader have to put in the body and the colour and the sound and the smells. When I saw the movie I thought yeah, that's the book, but a movie is passive. A book is really active for the reader because you've got to do all that work. So anyway, he did this thing with Jurassic Park where the issue was thinking about cloning before it was a big thing. And thinking about the ethics of cloning and the ethics of science. And should there be rules about this? And what if it goes wrong?

Another book he did was called Disclosure, which again was made into a great movie, but it was about sexual harassment in the workplace before it was a major issue, and he turned it on its head, which in a way made it a more provocative subject, because he made the harassment by a female boss of a male employee. And so, at the time, a lot of men in the workforce might have thought 'sexual harassment is no big deal', but then if you put the guy in the position where he is the victim, he is forced to look at it in an entirely different way, and I actually think he (Crichton) did a great service. So I try to do that.

Abbey's: This brings me to the idea of choosing the thriller format to explore big ideas. You could be writing a non-fiction book or an essay on that sort of thing. Is it about the power or the cut-through that you get with a broader audience? 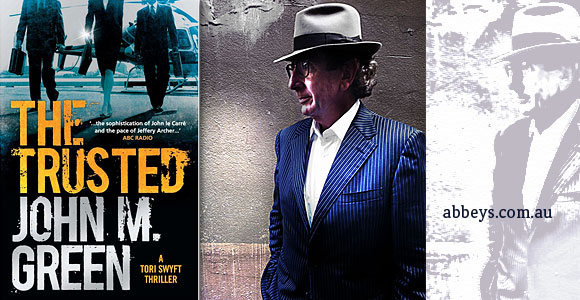 Mr Green: Yes, I really wanted to write something that I wanted to read, and I thought if I wanted to know about something and it was put to me in a way that was entertaining, then I'm more likely to read it, enjoy it and learn about it without it being in any way a lecture. I certainly don't want to do that. I always start my thinking about a novel with a 'what if' question. So, pick the topic and then, what if this was pushed further than anyone would normally think? What could happen? So I did that in the first book (Nowhere Man), thinking about where the stockmarkets were at the time, which was very buoyant and bubbly and then I imagined, what if they went wrong and they had a financial crisis.

In Born to Run, I thought, you know, every American President for - quite a while - has been charismatic has been a Democrat, so what if I were to craft a really, really charismatic and popular Republican. What would she look like? What would happen and what would be the forces against her? All of that sort of stuff. And I've got a big fascination for American politics.

And so for this book, for The Trusted,… well, as Kevin Rudd once said, 'The environment is the greatest moral challenge of our time'. It's the passion that is driving public opinion on many, many things. So I said 'well, we all think that people who are pro-environment are good people.' What if they go to extreme? And how could they go to extreme? We know about all sorts of terrorists in other fields and I thought, well 'what if these guys were so radical that… and then I came up with this concept of 'what if' to save the planet, they would destroy its economic system because they're so concerned that governments are not doing anything, that business is not doing anything, and that even what they are doing is just playing at the edges - that it needs radical action - that actually what you have to do is shut off the power. You have to shut off the oil industry, you have to shut off the banks and all of this stuff. You have to stop population growth. We're at seven billion people and growing fast, all of which is plundering the planet. So how would they do that?

Well, they wouldn't do it as neo-Luddites, who go and throw bombs at factories. They'll be much smarter than that. Because we're in a time in history for the first time ever where globalisation and technology give people tools at their fingertips, that they can cause things to happen all over the world instantly. I thought these guys have to be really, really smart. They have to be brilliant, so I made them all PhDs. They have to be 'inside the tent', not 'outside the tent'. So, not people throwing bombs or hacking into organisations. And the lightbulb went off for me when I remembered the Cambridge Five. These were the Soviet sympathisers…

Abbey's: And the shock to everyone… to society…

Mr Green: Exactly. It was a huge shock. Here was a bunch of Cambridge graduates in the UK, part of the establishment, who were Soviet sympathisers who infiltrated the highest echelons of the British secret service. One of them was even the Queen's closest adviser, (Anthony) Blunt. These people were part of Britain, yet they were Soviet spies.

So I thought, OK, this is a great model. What I'll do is transplant the Cambridge Five, who fuelled many John Le Carré books, and I'll say I'm going to have a group like that, but they're going to be radical environmentalists because it's not capitalism versus communism, or democracy versus communism any more. It's the environment, that's the passion. I'm going to make them radical environmentalists, but brilliant, and they are going to conspire, they are going to spend 10 years to infiltrate the highest echelons of business and government all around the world so that at the relevant time they can press the button, pull the plugs, smash the economy and save the planet.

And then I thought, 'how the hell do I do that'? I have to find smart people who can help me. So I firstly conceived all the things I wanted them to do. So I thought like a bad person... 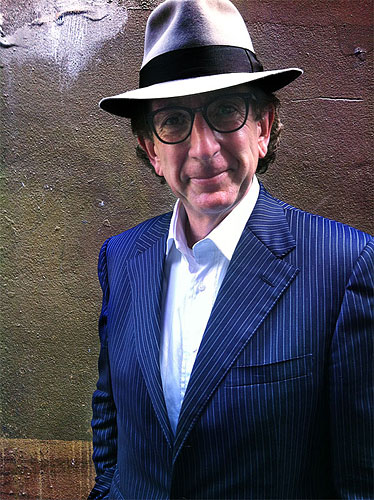