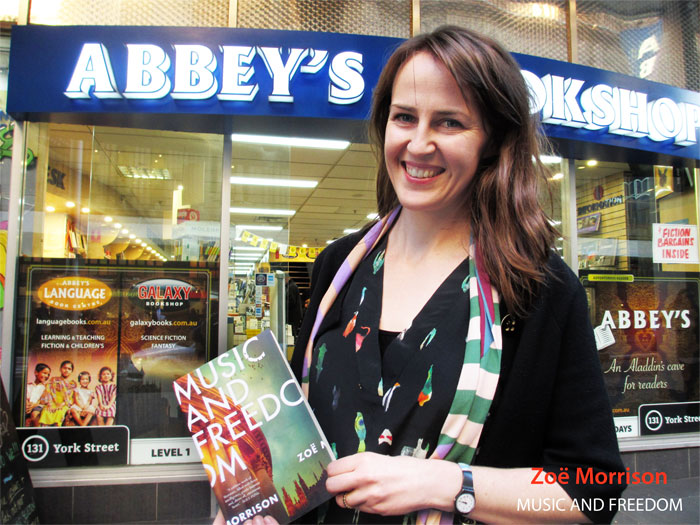 
On an orange orchard in rural Australia, from age three Alice Murray has been learning to play the piano. When her talents are soon recognised, Alice’s mother sends her to boarding school in England. As doors open and opportunities present themselves, Alice continues her musical education abroad all the while trying to reconcile her deep yearning to return home to her mother, with her dream of becoming a concert pianist. It’s during her time spent in a musical summer program at Oxford that she meets Edward, an intriguing, seemingly worldly economics professor. What she believes to be a powerful love, Alice soon realises is a harrowing force threatening to destroy and isolate her from the sanctuary of her music.

This compelling, bittersweet novel is a beautiful exploration of the transcendental nature of music and the restorative powers of love. In later years, as music once again makes its way into Alice’s life, she begins to realise that resurrection is never an impossibility, and that what is broken can, with a little faith and determination, be mended. Lyrical and intelligent in its style, this book will stay with you well after you have turned the last page.


The House at the Edge of Night
Catherine Banner


I am sure this writer will be compared to Louis de Bernieres but to me she has produced a truly original story and written it in a straightforward style of her own. Off the coast of Italy lies the island of Castellamare, remote, old fashioned and almost untouched by monumental events happening elsewhere in the world. But, change is inevitable and will bring both happiness and despair to the inhabitants of this small and rocky outpost. It’s a long book but a real ‘page-turner’ and has suspense and humour in every chapter.


Memories: From Moscow to the Black Sea
Teffi


Every now and then you are fortunate enough to come across an author that you know you will be re-reading long into your golden years, and to that short but cherished list I now introduce Teffi. What a discovery! It only took a few chapters of her modern voice, charm and intelligent observation to wholeheartedly win me over.

A Russian writer from the early twentieth century, she was so widely read that she could count both Lenin and Nicholas II as avid readers. Only recently translated for English speaking audiences, her autobiographical account of leaving revolutionary Russia and her uncertain journey as a refugee is a timely release.

The journey itself is at times so distressing that it is a testament to her character and naturally humorous disposition that can still make you laugh. This book was an absolute treasure to me, as is Teffi herself, and I am so delighted to have discovered her!


Four oddball loners become entwined in a very strange and novel situation. Revenge and murder, and very enjoyable as the layers gradually peel away to reveal tragic truths. Witty and literary, Zane Lovitt’s writing pops with youthful invention and has that irresistible pull as to what happens next.

Jason Ginaff goes by many names. This is due in part to his hyper-vigilant attitude to privacy and also to his consulting work, utilising his keen skills in accessing information online about corporate job candidates to unearth embarrassing or compromising stuff they’d forgotten or thought they’d deleted. He’s an accomplished liar.

Jason has also been seeking out the father he never knew. And now he’s found him - former Detective Glen Tyan, known as ‘The Polygraph’ for his ability to suss out a liar.

Rudy Alamein is a man-child whose stunted development arose from the tragic murder of his mother thirteen years ago, for which his father was incarcerated. Rudy wants Detective Glen Tyan dead.

And then there’s Elizabeth.

As the day of reckoning draws nearer, some very intriguing aspects about the murder of Cheryl Alamein are unearthed.

When I finished reading this, I kind of wished I was starting out again. Very, very enjoyable. I’ll be seeking out Lovitt's debut, The Midnight Promise (Winner: Best First Fiction - NED KELLY AWARDS 2013), and anything else he cares to write.


Subhi is of Rohingya descent, but he was born in Australia. Unfortunately, he was born in a detention camp, where he has spent his whole life. By nature he is optimistic and good-natured, though little in his external circumstances could be said to be hopeful - his mother is withdrawing from life, his older sister is either angry or contemptuous, his father still hasn't made it to Australia, the camp has little in the way of resources.

Yet Subhi is attracted to stories and they to him - the most powerful is the Night Sea, and the wondrous creatures and gifts it contains keep him  hopeful. Then one night Jimmie, who lives beyond the fence, makes her way over it and meets Subhi.

An unlikely friendship develops as they exchange stories. Jimmie is struggling with the loss of her Mum and the absence of her father, and poverty and neglect are part of her life, but together Subhi and Jimmie discover the true power of storytelling… A thoughtful book along the lines of Morris Gleitzman's novels.


Hoskyn's new book is about the artistic/bohemian community of Woodstock, from its beginnings in the early 1900's and its peak during the 60's and how Dylan embraced it, then abandoned what was once an isolated, artistic community but soon turned into a tourist haven. Brilliant.