Don't Leave Childhood Without This! 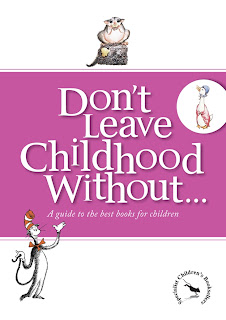 Don't Leave Childhood Without… came about when a group of experienced children's booksellers based in Sydney (The Specialist Children's Booksellers) decided that there was a need for a small and inexpensive guide to the books that we thought were essential reading for youngsters. When we added up our combined time in the book trade, we came up with the impressive figure of 300+ years, so putting aside dodgy maths, we thought we were entitled to say we were experts!

The first edition came out in 2002, after many late nights, occasionally heated (but mostly good-natured) discussions over what constituted indispensible reading matter, and an awful lot of unforeseen details that needed clarifying. When we had sold - much to our delighted surprise - most of the first print run by the first year and a half, we decided to update and reprint. More late nights, heated discussions and unforeseen details to clarify, we printed 10 000 copies of the second edition in 2004, and this time were in a position to make a profit, which we decided to funnel towards the Indigenous Literacy Foundation.
Our little guide has continued to sell steadily, and raise a nice amount for the cause of advancing literacy in underprivileged areas, and we have been very proud of it. But even 10 000 copies run out eventually, so the group decided to embark on the third edition. After (yep, you guessed it) more late nights, warm discussions and the inevitable small details that always crop up, but this time with the help of the indefatigible Simon Milne of Leading Edge Books (a buying group set up to assist independent bookshops) the third edition arrived last month. The art design has been tweaked, but the guiding principles remain the same: all children should have access to quality books. And yes, all profits still go to the Indigenous Literacy Foundation, so you help the children you know by using it, and children you don't, by buying it! Lindy
Posted by Abbey's Bookshop at 07:18