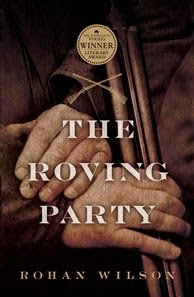 Wednesday night and off to the Vogel Award. This year was different, in that the premier literary award for an unpublished manuscript (with part of the prize being publication the following year) was announced the day before the book was available to buy. Hooray, say the booksellers; every one of us there have had the inevitable phone call the next day at work along the lines of "have you got the Vogel winner?" as there is always someone who didn't hear the bit about it being awarded to an unpublished work…

The award was announced by Tim Winton. I've been fortunate enough to have heard him speak a few times and Tim is the only man in the room who thinks he's no good at public speaking! He told of being awarded the Vogel back in 1981, of dining at Len Evans' establishment (wearing a borrowed pure polyester lounge suit in beige and with 'lapels as wide as verandahs'), of the cultural shock of coming from Charles Court's state and sitting opposite Don Dunstan resplendent in a batik suit, of being in awe that someone like Robert Drewe thought he, Tim Winton, could write well enough to win a prize. As he said, it confirmed his desire to be a professional writer, not someone doing it as a hobby. The difference the Vogel could make, and did, and has!

The young Tasmanian who was announced as the winner (Rohan Wilson for The Roving Party) looked at the crowded room, and rather endearingly said "S##T, that was TIM WINTON!!!!" He went on to say what a difference the prize would make to him, that he and his wife and little son could live on the money for a year, that it was just staggering to win. I spoke with him later on in the evening, and he was still on a cloud somewhere above the rest of us. Even asking what he was doing his PhD on (the interface between history and historical fiction - I think!) didn't bring him down!

Over the thirty years of the Vogel being awarded, it has amounted to roughly a million dollars and the careers being launched of a number of wonderful, interesting and influential writers. Congratulations to all involved, particularly the Stivns family who have honoured their father's desire to give back something to his adopted country. We are all the richer for it! Lindy
Posted by Abbey's Bookshop at 09:03