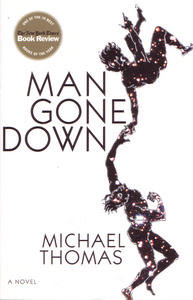 Man Gone Down by American writer Michael Thomas has won the 2009 IMPAC Dublin Literary Award.
The IMPAC award is unique in that it receives its nominations from public libraries around the world. Man Gone Down was nominated by The National Library Service of Barbados, Bridgetown, which described it as “A vibrant, well written first novel, an exploration of identity, inter-racial relationships and societal values through the eye of a black male.”
One of the judges, Irish academic and writer James Ryan said “We never know his name. But the African-American protagonist of Michael Thomas’ masterful debut, Man Gone Down, will stay with readers for a long time. He lingers because this extraordinary novel comes to us from a writer of enthralling voice and startling insight. Tuned urgently to the way we live now, the winner of the International Dublin IMPAC Prize 2009 is a novel brilliant in its scope and energy, and deeply moving in its human warmth.”
Other shortlisted books were The Brief Wondrous Life of Oscar Wao by Junot Diaz, The Burnt-Out Town of Miracles by Roy Jacobsen, Ravel by Jean Echenoz, Animal's People by Indra Sinha, The Reluctant Fundamentalist by Mohsin Hamed, The Archivist's Story by Travis Holland and The Indian Clerk by David Leavitt.
Posted by Abbey's Bookshop at 10:39