With Morrissey hitting our shores in May 2015 for a run of concerts at the Sydney Opera House during the VIVID Festival. Sadboys and Sadgirls who haven't yet read his Autobiography ~ what are you waiting for?!

For any Morrissey fan, this is a joy to read for the language alone. Steven Patrick Morrissey does most definitely enjoy and employ a poetic turn of phrase and indulge his passion for alliterative word play. The effect is such that you could just about take any passage from the book and, in your best Moz impersonation, sing it aloud (yes, of course I did this). More importantly it was a page turner which, for a big book with small print and no chapters(!), is a good thing.

My fandom is always focused on the art alone which in Morrissey's case is his unique vocal delivery so perfectly matched to his extraordinary lyrics. That meant I really knew nothing of Morrissey apart from the fact he came from Manchester. The first part, telling of early family life, school and the streets of Manchester, read very much like a Dickens novel - full of grim menace and florid characters. Striking observations paint the mood, such as the appearance of any man at the door being taken as a sign of danger.

We move through early music influences and the emergence of his own desire to create, and throughout the book there are instances of Moz's own fanboy impulses, nearly always and not surprisingly deflating experiences.

The Smiths. Here the battle begins. Morrissey's early artistic life seems almost entirely full of incompetence - that of label executives, managers, and also his own and Johnny Marr's. Everyone bumbles along. The young artist is easy prey. The invective is ripe.

When the book arrives at the legal battle that was to destroy The Smiths, the scar is a chasm. The bile that Morrissey spews onto the judge is infectious and I feel the rage, although I'm aware that I'm only getting one side of the story. Mike Joyce's name is mud and the possibility of a Smiths reunion seems laughable in the extreme.

The book then moves on to life post-Smiths and a gradual emergence and point-scoring against a perceived perennial snubbing by England's music press, and a succession of world tour love-ins where he finally receives the accolades and adoration he craves. I had noticed, with minor annoyance, the US spelling throughout the book. Odd for an autobiography from a person from the UK published by a UK imprint, but not so odd when we appreciate the world-wide nature of his fan-base and in particular that of the US.

Is Morrissey difficult? I guess so, but that is probably the prerogative of an artist trying to pull something out of the morass of mediocrity.

Is Morrissey happy? I guess so. Laughter is not something that features in the book and it would seem, in life his generally. If it was, could he have written the lyrics he does? Morrissey writes his life in his songs. He notes a memorable exchange with a producer who asked "Do you ever get tired of singing 'I,I,I,I,I,I,I'?" to which Morrissey replies with dripping derision, "I?"

p.s. Sitting alongside Morrissey's glorious special edition hardback (full of interesting colour pics not included in the Penguin Black Classic edition) I spy a book titled Cowboys and Indies by Gareth Murphy. On the cover, at the bottom, is a quote by Geoff Travis, who was head of The Smiths' label, Rough Trade. Of Cowboys and Indies Travis says "If this book was a group, I would definitely sign them. It is that good." It makes me smile to think of Morrissey's response.


Available from Abbey's ~ abbeys.com.au or 131 York Street Sydney (next to the QVB and Town Hall). 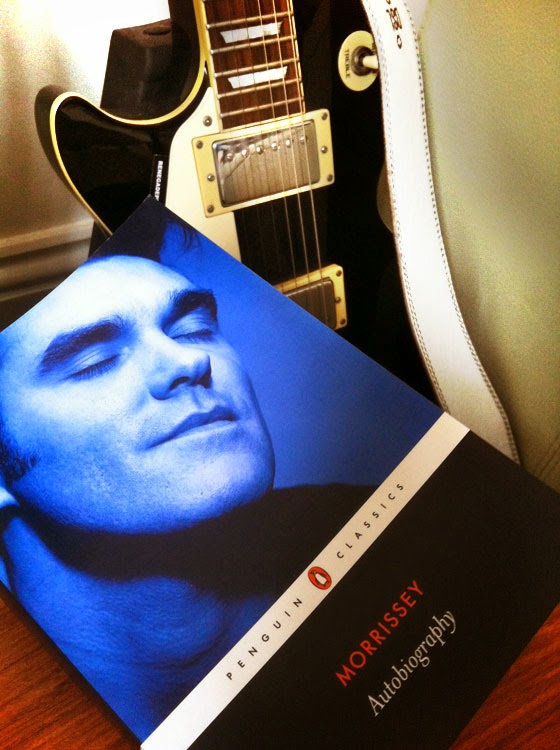