Lewis and Uhlmann spread it on thick.

How do you like your marmalade? Smooth and sweet? Or do you prefer it to be like politics - chunky with a bitter bite?

The Marmalade Files is by two political journalists at the top of their game, Steve Lewis and Chris Uhlmann. Lewis has a long and distinguished career with The Australian Financial Review and as Chief Political Editor for The Australian. Uhlmann has charted an upwards climb through the ABC to become Chief Political Editor for ABC News 24 and co-anchor of the incisive current affairs program, 7.30. 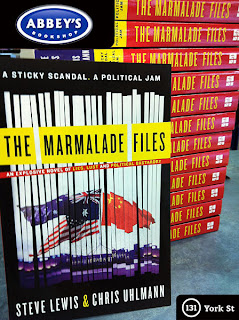 Both are very personable, friendly. But they can turn in a moment, as many a pollie knows. The pair have now teamed up to concoct a political thriller novel - an imaginative romp through the dark underbelly of politics.

As they were signing the first copies to hit the shelves, I got them while their guard was down and went in with the hard question, "How did this book come about?"

The scribbling stopped, an uncomfortable silence settled and glances ricocheted between the two. Chris broke the silence. "We were having a cup of coffee in Deakin and I said that I reckon a really good tele-movie could be made about some of these political events. Steve then mentioned that a novel would also be a good idea. We were soon hashing out the ideas for what the ingredients might be." As to how they transformed a fledgling idea into an actual book, Chris added "If either of us had tried to do it alone we might have struggled, but with each of us pushing the other along, the project gathered momentum. We expanded our ideas and put it in front of Harper Collins who were impressed enough to give it the green light."

Given this was their first novel, I upped the heat with the next question "Apart from your editors at Harper Collins, did you run early drafts of your book past friends to gauge their reaction to it?" Steve narrowed his eyes, then pounced. "We were keen to ensure that it rang true, and we did have some contacts…" "Spies" Chris chipped in. "… one in a senior position" continued Steve, "so that we were able to get things very true-to-life, even down to the approximate location of the Marmalade Files."

What? The files are real? Files full of shady doings and rumour are often the subject of conjecture. "Yes, the files actually exist" Steve confirmed, with a cocked brow. And apparently they really are known as the Marmalade Files (by those in the know, *wink*).

As I'm pondering why they might be called that (colour? sour contents? breakfast briefings?) the two bundle out the door with the briskness of two bloodhounds hot on the trail.

If you hurry in to Abbey's (or abbeys.com) you can snap up a signed copy while stocks last. Just keep reminding yourself that this is fiction.

The Marmalade Files is published on the Fourth Estate imprint and is available now at Abbey's.


More photos of Steve and Chris at Abbey's can be viewed at  facebook.com/AbbeysBookshop
Look for Authors at Abbey's Photo Album.
Posted by Abbey's Bookshop at 15:43