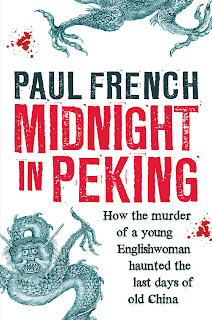 Midnight in Peking by Paul French is a tremendously interesting book which keeps you enthralled from page one. In Peking in the thirties, Pamela, the teenage daugher of a former consul to China, was murdered. Her body, horribly mutilated and with her heart and other organs missing, was found close to where she lived.

As Japanese troops begin to encircle the nervous inhabitants of the city a police investigation begins. Jointly headed by a Chinese detective and a British policeman, they attempt, though their authority is severely restricted, to solve the crime.

Pamela's father, Edward, was not well liked amongst the European community,- he was not a good mixer and lived outside their European enclave in a house in one of Peking's winding alleys. His grief seemed genuine and yet his wife, a robust and beautiful woman much younger than her husband had died, seeming inexplicably, some years previously.

Pamela was a troublesome teenager too, disruptive and expelled from the city's schools. And close by their home were the 'Badlands', a seething maze of bars and brothels. Fascinating, exciting and tragic, this is a great book that makes you seethe with indignation. Peter Smith