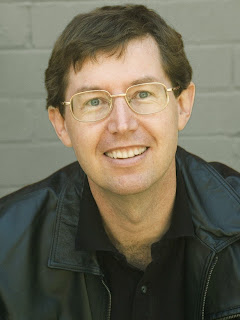 Gary Corby's first book, The Pericles Commission has been very well received by both the public and the critics. He was kind enough to answer some questions from Abbey's about his work - oh, and he dropped in and signed some copies of his book as well!

You have set your crime novel in the somewhat neglected period of Classical Athens compared to Ancient Rome or Egypt. Was this a conscious decision and why a crime novel rather than a straight novel? I've always loved puzzle stories, both of the murder mystery kind and the science fiction kind. (Galaxy Bookshop was a favourite haunt, back in my university days when I could pass by frequently!) Classical Athens was one of the most exciting periods of human history. These people started western civilization; you can't get much more critical than that! They all lived in a period of just 50 years, in a place no larger than a modern town, and they all knew each other. Also, they killed each other in such interesting ways. So when I decided to write a novel, it was the most natural thing to write a murder mystery set in ancient Athens.

In the next novel Nico visits Themistocles in the Persian Empire. Are you going to continue a longer series with Nico as the main character? If so, how far afield do you see him travelling? Nico’s adventures will eventually take him around much of the known world. The second book is The Ionia Sanction. Ionia was the western coast of what's now Turkey, and part of the Persian Empire. The third book takes place at the Olympics of 460BC. Nico's definitely going to Egypt some time. I already have notes for that one and a fair idea of the characters. After that, there are so many options: Southern Italy was entirely Greek; Carthage was up and running; Marseilles in southern France began as a Greek colony called Massilia. Readers have begun to send me requests for Nico to go to certain places! Several readers want him to go further inside Persia. I'd like to get him to Susa and Babylon. That would certainly be a perilous mission because it's right in the heart of the enemy empire. I'll keep writing these books so long as people want to read them. There's no shortage of material. The Golden Age of Greece was 50 years packed with tales of adventure, war, conspiracy, lust, love, corruption, power politics, assassination...you name it and it happened.

You have used a mix of real and fictional characters and events will this continue in future books? Absolutely. Luckily for me, because the period is largely untapped, there are huge wells of history from which to turn real events into stories so strange, they read almost like fantasy. I’m somewhat driven by when things actually happened. The years 460 to 461 BC were among the most momentous in history and the first three books take place in quick succession in less than 12 months of story time. I’ll have to slow the pace soon though, or at 3 books per story year I’ll need 150 books to get my heroes through the entire Golden Age.

Did you do any specific research for this book, or did you just draw on your existing knowledge of ancient Greece? I do massive amounts of research. I once spent three hours proving the ancient Greeks had garlic, so I could write one line of text. Because I use a large number of historical people in the stories, I study their lives in minute detail to make sure I don’t break real history. I’m very keen on the historical accuracy aspect. Original sources are crucial. I read a lot of classics written in the 5th century BC, which may sound ultra-nerdy, but really is fascinating. Herodotus was the father of history, and he's researching his great work, which we know as The Histories, at the very moment Nicolaos is solving murders. So I’ve picked a very decent time to be writing in! (I can absolutely guarantee Herodotus will appear as a character in a later book.) Being immersed so heavily in the ancient world makes you view the modern world in a very different way. If you think modern politics is tough, try the ancient version in which losers are regularly exiled or killed. Also, the mindset of everyday life was a weird combination of the totally familiar and something like from another planet.

Can you recommend any non-fiction books for anyone who wants to learn more about Periclean Athens? All the Greek novels of Mary Renault! They're fiction, not non-fiction, but they're simply the best stories of ancient Greece ever written, and I'm quite sure they'll be available at Abbey's Bookshop. Other than that, why not go straight to the horse's mouth? Herodotus and Thucydides! Herodotus is a fine old chatterbox and reads more like a Boys' Own Adventure than the founding document of history and anthropology. Thucydides is full of geopolitics and is better than any modern thriller. Thanks for the terrific questions! I've really enjoyed answering them. If anyone's interested, I keep a blog at GaryCorby.com, in which I rattle on about the publishing experience and ancient history.
Posted by Abbey's Bookshop at 20:22