The Horror of Abbey's 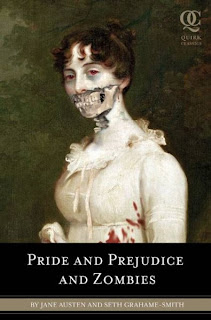 Interesting thing here at Abbey’s: we assume our customers are well-read and classically inclined - in most senses of the term. And that they will, as a rule, be more sympathetic to Suetonius than Stephen King. But here are a couple of titles to upset our ready-made assumptions: Let the Right One In and Pride and Prejudice and Zombies. Swedish author John Ajvide Lindqvist wrote a disturbing novel a few years ago about a bullied boy and his infatuation with a young girl he only saw at night, while all around were dead bodies drained of blood and strange sexual undertones. A few days ago, I placed a small comment about Let the Right One In (and the current, very well realized, film version) in an email newsletter and of all the books mentioned, this 2004 novel of vampire love generated the most “click-throughs”.

Jane Austen has for years been the subject of updates and, as Hollywood names them, “re-imaginings”. From Emma as Clueless, through Bridget Jones’ famous diaries, and the recent Lost in Austen, Jane has been given ample reason not to be still in her grave. Now she has zombies to contend with. (Or as the book’s subtitle puts it: “now with Ultraviolent Zombie Mayhem”.) Pride and Prejudice and Zombies has - so far, as I’m only partway through an advance copy - a recognisable Elizabeth Bennett, concerned as always with the attempts to marry off her family to the wrong men, with her doubts about D’arcy and the behaviour of so-called civilized members of the respectable classes. There’s also a very real threat from an ongoing war with the cannibalistic infected, who surround pockets Regency England and most of the balls that the Bennett sisters long to attend. The witty dialogue and veiled insults remain – in many cases word for word Austen - but “co-“author Seth Graham has added the Bennetts’ martial arts training and the nice thematic opposition between the rules of an insecure society and the violence of the uncivilized mass. Great fun, for those with a certain taste in literature.

These two books are examples of a recent trend in publishing – think Twilight pushing out beyond the teenage girl. Pride and Prejudice and Zombies will be at Abbey’s, and if the buzz from the US (it’s #10 on a certain famous US online book retailer) and the customer requests here are anything to go by, expect to see multiple decaying Jane Austen’s among our shelves quietly, silently, making their way into people’s shopping baskets. We still stock Suetonius, of course, even if he doesn’t do undead (yet). Adrian
Posted by Abbey's Bookshop at 10:42