The Island of the Ancients 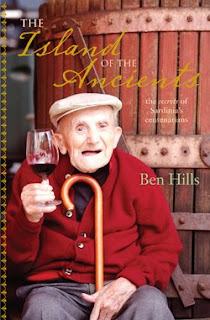 Well, I put on my social shoes and trotted off to a book launch/photographic exhibition opening on Wednesday night. The event was for the book The Island of the Ancients : The Secrets of Sardinia's Centenarians by Ben Hills, and the exhibition was of photographs taken by his wife, Mayu Kanamori, some of which are featured in the book. I was a guest of Murdoch Books, the publishers, and the only bookseller in attendance, which made for an interesting evening of people-watching - most of the other guests were connected to the 'artistic' community, I was told, and they are quite decidedly different from the book people I usually mingle with! Sartorially, black was the thing, and a cravat or two, and a grey pony-tuft or two, and some other small eccentricities, were on show. (Though I have a grumpy-old-woman moment when the conversations started rippling throughout the official speeches - there is bohemianism, and there is rudeness!) The food was delicious, and the Sardinian wine most quaffable (Argolias wine - Antonio Argiolas, whose raffish photograph graces the cover of the book, lays claim to being the world's oldest winemaker).
The book is an interesting mix of travel narrative, interviews, food, science and meditations on what makes a good life. The exhibition will run until 28th September, on the second floor of the Customs House at Circular Quay, and the technically proficient portraits of the centenarians (many are surprisingly youthful in looks - well they look 70 maybe, not 100!) are well worth a look. And what is the secret to the Sardinian's longevity... read the book!! Lindy
Posted by Abbey's Bookshop at 22:17